The Importance of Outlier Detection in Big Data

An outlying observation, or outlier, is one that appears to deviate markedly from other members of the sample in which it occurs.[2]

As can be seen from the definition, there is an important (and at the same time confusing) element in this definition. An outlier “appears” to be different from other members in the data set. This important element means that outlier detection techniques can detect potential outliers, but that the final interpretation of the result is still a human exercises. This is as true today as it was in 1969.

There is however a significant difference between the times of Grubbs, and the times of today. The volume and velocity with which data is created and needs to be processes is larger than ever before. At any moment in time, millions of social media posts, messages, transactions and videos are created. As a result, outlier detection techniques need to have the capability to process data almost real-time. They need to showcase potential outliers immediately. Because in many cases, the information that outlier detection in Big Data provides, is time sensitive. The examples that we discussed earlier – such as credit card detection and malicious chatter – are strong examples of the time-sensitive nature of outlier detection results.

The list above is by no means intended as an exhaustive list of use cases of outlier detection, but merely as an illustration how Big Data has significantly changed the spectrum. For all the examples above, the data sources have increased significantly in recent years. As stated before, the number or transactions, messages and images that is created every day is larger than ever before. 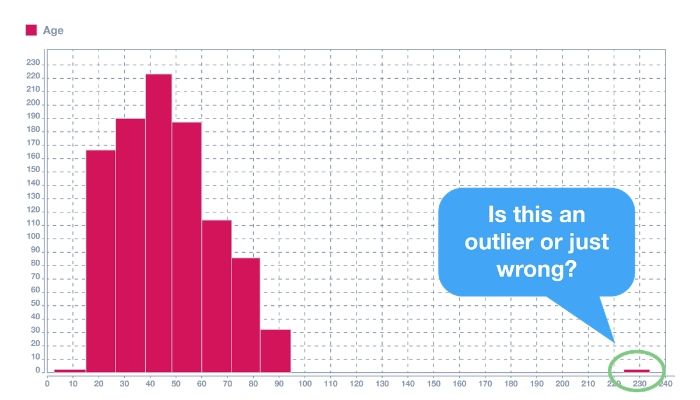 So what are the best outlier detection techniques to use on Big Data? And are any recommended algorithms that can best be utilized to solve particular outlier detection use cases. Unfortunately, there is not a straightforward answer to this question. The speed and accuracy of each algorithm depends on the source data that needs to be analysed, as well as the homogeneity of the source data.

However, this does not mean that there is not answer at all. Previous research has found that outlier detection algorithms can broadly be divided into five key categories. These categories can correspondingly be applied to the source data of the underlying problem.

Statistical outlier detection algorithms form one of the earliest, and still one of the most widely used, techniques that are used for outlier detection. In most cases, statistically probability (or better formulated: statistical improbability) form the basis for detecting any outlier. In the most simple form, statistical models work on the basis, that a certain chance is so unlikely to happen, that it must be an outlier. In a very simple example, this is the technique that is applied to indicate outlier in box plots.

Parametric models for outlier detection overcome the problems of runtime complexity that proximity based models imposes. For that reason, they are extremely suitable for dealing with Big Data. Popular parametric models are the Minimum Volume Ellipsoid estimation (MVE) and Convex Peeling[3]. In a parametric model, the runtime complexity only grows with the model size, and not with the size of the data. The only difficulty is that – by the definition of parametric models – the parameters need to be estimated. The user of the model should therefore now beforehand that the data will fit the model. As a result, parametric outlier detection models are highly suitable and accurate for specific problems, but they cannot be used for generic purposes, where the properties of the input data set are unknown.

Neural network techniques for outlier detection introduce more modern technology to the identification and selection of outliers. Neural networks are non-parametric and model-based, and for that reason they are very suitable to be applied to “unseen” data patterns. In that sense, the can be utilized to address more generic cases and which the structure of the input data is unknown. Within the neural network outlier detection techniques, it is possible to use supervised techniques (classification) as well as unsupervised techniques (clustering). More information on Neural Network is discussed in this article.